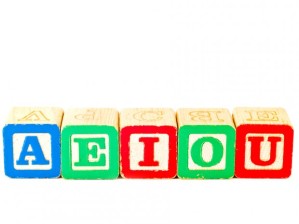 Hassan can, at a handclap, call a vassal at hand and ask that all staff plan a bacchanal.

This surprisingly coherent little piece of verbal frivolity is an example of univocalics – a type of constrained writing in which all words use only a single vowel.

The brilliant Canadian poet, Christian Bök, is a master of this style. His prize-winning book Eunoia (which means “beautiful thinking” and is the shortest English word containing all five vowels) has five highly entertaining chapters, each one dedicated to a specific vowel.

Here are a few examples, which I’ve reproduced from the BBC News article “Beautiful Vowels”:

(from CHAPTER A – FOR HANS ARP)

Hassan Abd al-Hassad, an Agha Khan, basks at an ashram – a Taj Mahal that has grand parks and grass lawns, all as vast as parklands at Alhambra and Valhalla. Hassan can, at a handclap, call a vassal at hand and ask that all staff plan a bacchanal – a gala ball that has what pagan charm small galas lack. Hassan claps, and (tah-dah) an Arab lass at a swank spa can draw a man’s bath and wash a man’s back, as Arab lads fawn and hang, athwart an altar, amaranth garlands as fragrant as attar – a balm that calms all angst. A dwarf can flap a palm branch that fans a fat maharajah. A naphtha lamp can cast a calm warmth.

(from CHAPTER E – FOR RENE CREVEL)

Westerners revere the Greek legends. Versemen retell the represented events, the resplendent scenes, where, hellbent, the Greek freemen seek revenge whenever Helen, the new-wed empress, weeps. Restless, she deserts her fleece bed where, detested, her wedded regent sleeps. When she remembers Greece, her seceded demesne, she feels wretched, left here, bereft, her needs never met. She needs rest; nevertheless, her demented fevers render her sleepless (her sleeplessness enfeebles her). She needs help; nevertheless her stressed nerves render her cheerless (her cheerlessness enfetters her).

(from CHAPTER I – FOR DICK HIGGINS)

(from CHAPTER O – FOR YOKO ONO)

Loops on bold fonts now form lots of words for books. Books form cocoons of comfort – tombs to hold bookworms. Profs from Oxford show frosh who do post-docs how to gloss works of Wordsworth. Dons who work for proctors or provosts do not fob off school to work on crosswords, nor do dons go off to dorm rooms to loll on cots. Dons go crosstown to look for bookshops known to stock lots of top-notch goods: cookbooks, workbooks – room on room of how-to-books for jocks (how to jog, how to box), books on pro sports: golf or polo. Old colophons on schoolbooks from schoolrooms sport two sorts of logo: oblong whorls, rococo scrolls – both on worn morocco.

The University of Pennsylvania’s PENNSOUND centre for programs in contemporary writing has a good collection of Bök audio files (“page down” a couple of times to find the Eunoia section), and if you’re interested in hearing Bök himself reading from Eunoia, you can find him on YouTube.

And now… I guess it’s time I got back to work!